Palestinian and Israeli Young Leaders met in Bethlehem for a weekend of workshops, seminars, dialogue and activities. This was the first time that most of the participants attended the 2010 Summer Academy were able to meet each other and participants of past Summer Academies. The entire weekend was organized by coordinators that the Young Leaders had previously appointed, further empowering the young people and giving them the opportunity to work with the other side.

The weekend started by sharing experiences in the Summer Academy and how participants lives changed when they returned to their different societies. Participants also participated in a “World Café” workshop, where they broke off into small groups and had important questions to discuss related to the conflict. Some of the questions were:

The first evening, one of the Palestinian participants showed a short documentary about the Popular Struggle, or unarmed resistance, in Beit Ummar and gave a lecture about the role collaborators play in the Israeli strategy of undermining Palestinian activists. Other Palestinian participants shared their personal stories of collaboration, opening up to the group about one of the central issues in Palestinian society today and giving Israeli participants the opportunity to talk about the problems they experience in their society. An Israeli Young Leader also led a discussion about political parties in Israel and their different definitions of Zionism.

After the discussion, the group went on a tour of Bethlehem with a tour guide that spoke Arabic and Hebrew. This experience was particularly signficant for Israelis, who were surprised that they did not have to conceal their Israeli identity in Palestinian areas. It also was exciting for the Palestinian participants, because they were able to show the Israelis that they do not need to fear the other and that Palestinians are accepting of Israelis who come as human beings, not as soldiers or settlers. 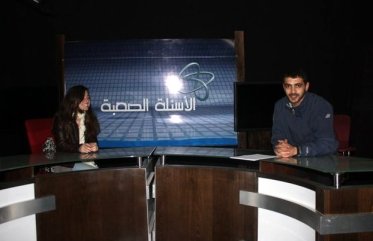 The Young Leaders also toured Maan News Agency, where they met the general manager, Raed Othman, and learned about the challenges of being a journalist in Palestine and working under Israelis occupation. The group also discussed how the media affects both sides perception of the conflict and toured the editing department, radio and television station.

The final event for the weekend was held right outside of Dahashe refugee camp at Fatima Al-Jaafari’s house, a prominent Palestinian political leader and bereaved family member. She told the group her personal story, about how three of her brothers were killed by the Israeli Defense Forces and how she turned her pain into political activity, most notably working with women and youth in the refugee camp and starting a sewing and embroidery cooperative to help provide widows and other women at risk with a sustainable income.

Young Leaders share a moment with Palestinian leader, Fatima al-Jaafari, in her home outside of Dahashe refugee camp

The next event the Young Leaders will participate in will be two national meetings, one of Israelis and one of Palestinians, in early 2011.

This event was made possible by Wings of Hope.  If you are interested in supporting the Young Leaders and Al Tariq,  please feel free to contact us, join our facebook page and share our message of development, democracy and non-violent conflict resolution with others.