Al-Tariq holds workshops for local leaders, educators and young political students empowering them to build bridges between their societies and spread the values of democracy, non-violence, dialogue and peace on both sides. For most of our participants, our programs are their first opportunity to encounter the “other” and provide the basis for them to build lasting relationships. While there are several Israeli organizations that invite Palestinians to meet with the other side, Al Tariq is one of the only Palestinian organizations that provides Israelis with the opportunity to work with a Palestinian organization.

The Summer Academy provides an opportunity for Palestinian and Israeli youth to meet, learn how to dialogue and become bi-national parterns. Held outside of Palestine / Israel, participants have the opportunity to step outside of the conflict and be on common ground in a new place. In addition, youth are met with a third group of international youth who join them for the trip, breaking down the binary nature of meeting with just two sides and creating more space for listening and understanding.

At the Summer Academy participants learn about the location that they travel to, building trust and giving them a chance to build human relationships. At the same time, in focused and facilitated daily discussions about the conflict, participants are able to express their national identities with the “other,” whom they are also building personal relationships with.

After the Summer Academy, graduates continue to nurture their relationships by planning the next Summer Academy, a combination of new participants and graduates, developing the schedule for monthly bi-national meetings and supporting each other in holding national workshops and becoming leaders in their societies.

The first bi-national meeting was held in March 2009, shortly after the Gaza War. This meeting gave the young leaders the opportunity to share their personal experiences, how the war had effected them, their families and their bi-national relationship. Other bi-national meetings have focused on non-violent conflict resolution, project planning, trauma and theatre. 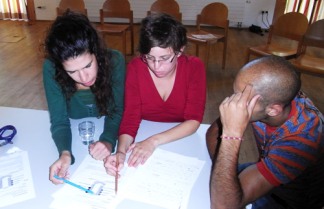 “Peace Blog” in cooperation with Arci

In preparation for the Summer Academy in 2009, previous young leaders in partnership with Archi, an Italian organization, created a private social network and invited the new group of young leaders to participate in weekly discussion about historical events that are important to both societies. Through this social network, the young leaders were able to build and maintain relationships with the other side outside of bi-national and international meetings.